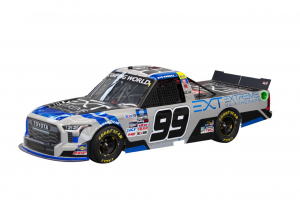 SANDUSKY, Ohio – HairClub is partnering with ThorSport Racing to serve as the primary sponsor on the Ben Rhodes No. 99 Toyota Tundra TRD Pro at Daytona International Speedway on Feb. 18.

“As a longtime supporter of NASCAR and young athletes, HairClub is thrilled to be a partner with Ben Rhodes and ThorSport Racing,” said Mike Nassar, CEO of HairClub. “Ben is a great example of working hard to win.”

Rhodes is driving the EXT Extreme Hair Therapy truck, which reflects one of HairClub’s most popular hair solutions and is decked out in cobalt blue, black and grey.

At just 24 years of age, Rhodes is the reigning NASCAR Camping World Truck Series champion, finding success at Daytona in his six series starts at the track. As the defending race winner, he has two top-five and three top-10 finishes including 55 laps led on the famous 31-degree banking racetrack. Rhodes began racing go-karts in 2004 when he was only seven years old. This is his seventh full-time season for the NASCAR Camping World Truck Series.

“It’s really fun to partner with HairClub for this EXT Toyota Tundra TRD Pro at Daytona. They are an iconic brand that have helped a lot of people over the years, said Rhodes. “Anyone can experience hair loss no matter the age. Together we are getting the word out that there is help. So not only does the Tundra look amazing but it carries a great message. I’m really excited to get them to Victory Lane!”

The racing action begins at Daytona on Thursday, Feb. 17 with a practice round, followed by the race on Friday, Feb. 18 at 7:30 p.m. ET on FOX Sports 1 (FS1). Watch additional coverage on the Motor Racing Network (MRN).

About HairClub
North America’s number one provider of total hair loss solutions, HairClub was founded in 1976. Since then, HairClub has helped more than half a million members restore, replace, and regrow their hair which transforms their lives. HairClub has more than 100 locations throughout the United States, Canada, and Puerto Rico, and is a wholly owned subsidiary of Tokyo-based Aderans Co. Ltd., the world’s leading provider of total hair loss solutions.

About ThorSport Racing
ThorSport Racing, based in a state-of-the-art 100,000 square-foot facility in Sandusky, Ohio is the longest-tenured NASCAR Camping World Truck Series team, competing in the series since 1996. The Sandusky-based team has five championships. For more information visit www.thorsport.com.

About Toyota
Toyota (NYSE:TM) has been a part of the cultural fabric in North America for more than 60 years, and is committed to advancing sustainable, next-generation mobility through our Toyota and Lexus brands, plus our more than 1,800 dealerships.

Toyota directly employs more than 48,000 people in North America who have contributed to the design, engineering, and assembly of nearly 43 million cars and trucks at our 13 manufacturing plants.  By 2025, Toyota’s 14th plant in North Carolina will begin to manufacture automotive batteries for electrified vehicles.  With the more electrified vehicles on the road than any other automaker, more than a quarter of the company’s 2021 North American sales were electrified.

Through the Start Your Impossible campaign, Toyota highlights the way it partners with community, civic, academic and governmental organizations to address our society’s most pressing mobility challenges. We believe that when people are free to move, anything is possible. For more information about Toyota, visit www.ToyotaNewsroom.com.