Cincinnati Inc. to Serve as Primary Partner of Ty Majeski’s No. 66 Toyota Tundra TRD Pro For Multiple Races in 2022

SANDUSKY, Ohio (Feb. 10, 2022) – Cincinnati Incorporated has partnered with ThorSport Racing to serve as the primary partner on the No. 66 Toyota Tundra TRD Pro for multiple NASCAR Camping World Truck Series races in 2022. 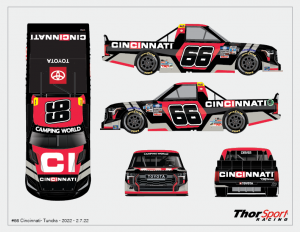 The No. 66 Cincinnati Inc. Toyota Tundra TRD Pro will make its debut at Daytona International Speedway on Feb. 18 with Ty Majeski behind the wheel.

“We are excited to expand our NASCAR sponsorships to the Truck Series. Like CI, ThorSport is an Ohio-based company with a long history of success and innovation. The ThorSport teams will now have access to a state-of-the-art CI laser system and press brake which will help their teams enhance the performance of their trucks,” said Tim Warning, CEO & President, Cincinnati Incorporated.

Cincinnati Inc., an American-owned machine tool manufacturer based in Harrison, Ohio, created a scheme that honors the company’s American roots, which dates to its inception in the 1890s. Cincinnati Inc. is responsible for making large-scale manufacturing tools such as software, lasers, press brakes, shears, pm presses, and automation.

The 2022 season will be Majeski’s first full-time season with ThorSport Racing following a selective number of races with the team last year. In addition, TSport will continue its representation on Majeski’s No. 66 Toyota Tundra TRD Pro throughout the season.

“Over the past year, I have built so many great relationships with incredible people at ThorSport Racing. I couldn’t be more honored to chase a championship with them in 2022,” said Majeski. ‘Our Cincinnati Inc. No. 66 Toyota Tundra TRD Pro looks great, and I can’t wait to give it a good run at Daytona. My team and I are ready to make the most of this opportunity.”’

Catch all the racing action from Daytona starting Thursday, Feb. 17 for practice followed by the race on Friday, Feb. 18 at 7:30 p.m. ET on FOX Sports 1 (FS1). Additional coverage can be found via the Motor Racing Network (MRN).

About Cincinnati Inc.
Cincinnati Incorporated (CI) is a U.S.-based, build-to-order machine tool manufacturer with over 120 years in the industry. From its modern campus near Cincinnati, Ohio, CI engineers and manufactures software, laser cutting systems, press brakes, shears, powdered metal presses, and automation. Each system is built with premium engineering features and extraordinary durability that stand up to years of rigorous use in demanding environments. For more information visit www.e-ci.com.

About ThorSport Racing
ThorSport Racing, based in a state-of-the-art 100,000 square-foot facility in Sandusky, Ohio is the longest-tenured NASCAR Camping World Truck Series team, competing in the series since 1996. The Sandusky-based team has five championships. For more information visit www.thorsport.com.

About Toyota
Toyota (NYSE:TM) has been a part of the cultural fabric in North America for more than 60 years, and is committed to advancing sustainable, next-generation mobility through our Toyota and Lexus brands, plus our more than 1,800 dealerships.

Toyota directly employs more than 48,000 people in North America who have contributed to the design, engineering, and assembly of nearly 43 million cars and trucks at our 13 manufacturing plants.  By 2025, Toyota’s 14th plant in North Carolina will begin to manufacture automotive batteries for electrified vehicles.  With the more electrified vehicles on the road than any other automaker, more than a quarter of the company’s 2021 North American sales were electrified.

Through the Start Your Impossible campaign, Toyota highlights the way it partners with community, civic, academic and governmental organizations to address our society’s most pressing mobility challenges. We believe that when people are free to move, anything is possible. For more information about Toyota, visit www.ToyotaNewsroom.com.