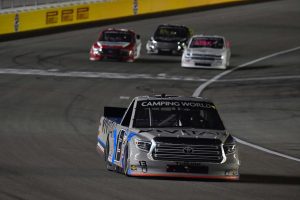 Started: 11th
Stage 1: 15th
Stage 2: 17th
Finished: 15th
Laps: 134/134
Laps Led: 0
Status: Running
Driver Points: 9th
Owner Points: 12th
Quotable: “It was a tough race tonight here at Las Vegas Motor Speedway as we struggled with the handling of the the No. 13 Vivitar /RealTree Toyota Tundra. I look forward to Atlanta where I’ve had some success there in the past.” – Johnny Sauter 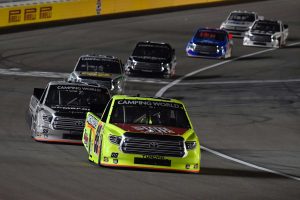 Started: 4th
Stage 1: 3rd
Stage 2: 4th
Finished: 5th
Laps: 134/134
Laps Led: 0
Status: Running
Driver Points: 4th
Owner Points: 4th
Quotable: “The restarts killed me to be totally honest. I could get to the 16 (Austin Hill) there at the end. I could get to his bumper and I could push him for a second and then he would get out on me. We just didn’t have the two lap run speed that we needed. We needed some long green flag runs and I think we would have been a lot better off. This Slim Jim / Menards Toyota Tundra, not too terrible. Just keep working on it.” – Matt Crafton 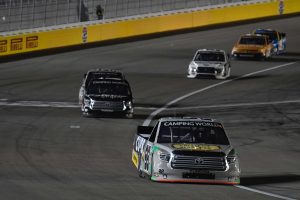 Started: 5th
Stage 1: 6th
Stage 2: 9th
Finished: 9th
Laps: 134/134
Laps Led: 0
Status: Running
Owner Points: 5th
Quotable: “It was a solid day for the Curb Records, Protect the Harvest, Bucked Up Energy Tundra. I felt like we had a top five truck at times, just struggled later in the runs to be able to stay there. Overall it was a solid execution weekend for the team. I’m looking forward to getting back in my No. 98 Toyota in a few months at Kansas!” – Christian Eckes 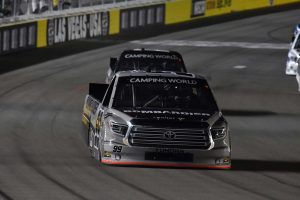 Started: 1st
Stage 1: 8th
Stage 2: 5th
Finished: 10th
Laps: 134/134
Laps Led: 0
Status: Running
Driver Points: 2nd
Owner Points: 2nd
Quotable: “Tough race today at Las Vegas Motor Speedway. We just didn’t have the speed in our Tundra that we needed to compete for a win but I’m still proud of how we fought and the pit calls that were being made to try to get the best finish possible. We were better than where we finished but still have some work to do to get better. This was a great learning experience for the next race at Atlanta. Thank you ThorSport Racing, Bombardier, Tenda, and Toyota.” – Ben Rhodes
0