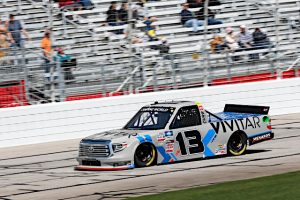 Atlanta Race Information
Started: 13th
Stage 1: 10th
Stage 2: 11th
Finished: 4th
Laps: 130/130
Laps Led: 0
Status: Running
Driver Points: 7th
Owner Points: 9th
Quotable: “It felt good to finally have some speed. Learn on what we learned from Las Vegas to here, obviously was a big deal. I’m proud of everybody on this No. 13 Vivitar / Sakar International Toyota Tundra. We had a solid day when we needed one.” – Johnny Sauter 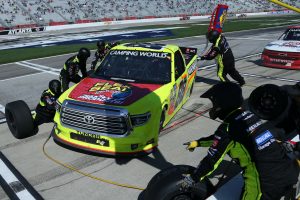 Atlanta Race Information
Started: 3rd
Stage 1: 7th
Stage 2: 9th
Finished: 8th
Laps: 130/130
Laps Led: 3
Status: Running
Driver Points: 4th
Owner Points: 5th
Quotable: “The No. 88 Flex Seal / Menards Toyota Tundra was good early in the run, then about halfway to a third of the way through a run we just shut off like a light switch and went really, really, loose off the corner. We made some really good adjustments there at the end of the race to make it better, but everything just didn’t work our way.” – Matt Crafton 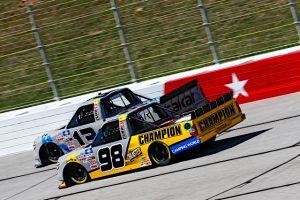 Quotable: “I appreciate Champion Power Equipment coming on board for this race, but I wish we could have had a better outing for them. I just couldn’t quite get the handle on our Toyota Tundra all day. We made it better and better. Jeriod made some good adjustment but 10 to 15 laps into a run we would be chasing it up the track really, really bad. We just never really got a good handle on it all day.” Grant Enfinger 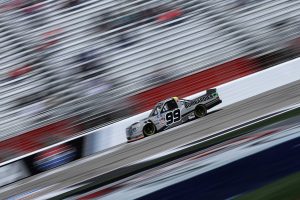 Atlanta Race Information
Started: 5th
Stage 1: 12th
Stage 2: 12th
Finished: 16th
Laps: 129/130
Laps Led: 0
Status: Running
Driver Points: 2nd
Owner Points: 2nd
Quotable: “Definitely not the day we wanted for our No. 99 Bombardier Toyota Tundra. It was a rough race for us as we struggled all day with rear grip – just keeping the rear of the truck underneath me – and some front end issues. A lot of the stuff we were trying to fix we couldn’t fix on the race track. We were a little bit along for the ride today. I give my guy’s props for being able to tune it in and crutch it the best they could.” – Ben Rhodes
0