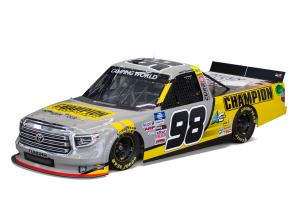 Making the Calls: Jeriod Prince
Eyes in the Sky: Chris Monez
Martinsville Stats:Enfinger is the most recent winner when he went to Victory Lane for the first time at the track last fall. He has three top-five and four top-10 finishes including 59 laps led to go along with his win.
Season Stats: In 11 starts with ThorSport Racing this season, Enfinger has tallied five top five and eight top-10 finishes to average a 12.1 start and 7.8 finish to go along with 155 laps led.
Series Career Stats: In 125 starts, he has six wins, 42 top-five and 77 top-10 finishes to go along with five pole awards and 855 laps led.
Starting Position: Eckes will start from the 15th starting position.