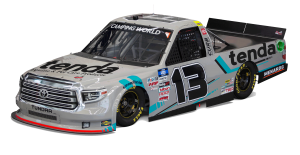 Making the Calls: Bud Haefele
Eyes in the Sky: David Pepper
Series Career Stats: 16 starts with his last appearance in the series being at Darlington Raceway in 2020. He has a series-best finish of eighth, at Charlotte Motor Speedway last year.
Quotable: “I’m extremely thankful for this opportunity here at ThorSport Racing and I’m ready to make the most of it. I’ve been hands on working at the shop for the last couple months and I’m going to be as prepared as I possibly can be. I know Bud (Haefele) and the guys on the team will put a great truck underneath me.”

Making the Calls: Carl “Junior” Joiner
Eyes in the Sky: Jason Hedlesky
Season Stats: Nine starts, two top-five and four top-10 finishes, averaging a 7.3 start and 12.1 finishing position to go along 15 laps led.
Series Career Stats: 484 consecutive starts, 15 wins, 127 top-five and 292 top-10 finishes in addition to 16 poles and 2,670 laps led.
Welcome Back! This weekend we welcome back Jack Links on the hood of the No. 88 Menards Toyota Tundra. 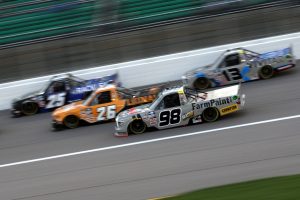 Making the Calls: Jeriod Prince
Eyes in the Sky: Chris Monez
Season Stats: Eckes has four starts in the No. 98 this year where he has tallied one top-five and three top-10 finishes averaging a 12.0 start and 14.5 finish to go along with 22 laps led.
Series Career Stats: 39 starts, 11 top-five and 21 top-10 finishes to go along with three pole awards and 310 laps led.
Welcome Back! This weekend we welcome back FarmPaint.com and Curb Records artist Rodney Atkins the No. 98 Toyota Tundra.