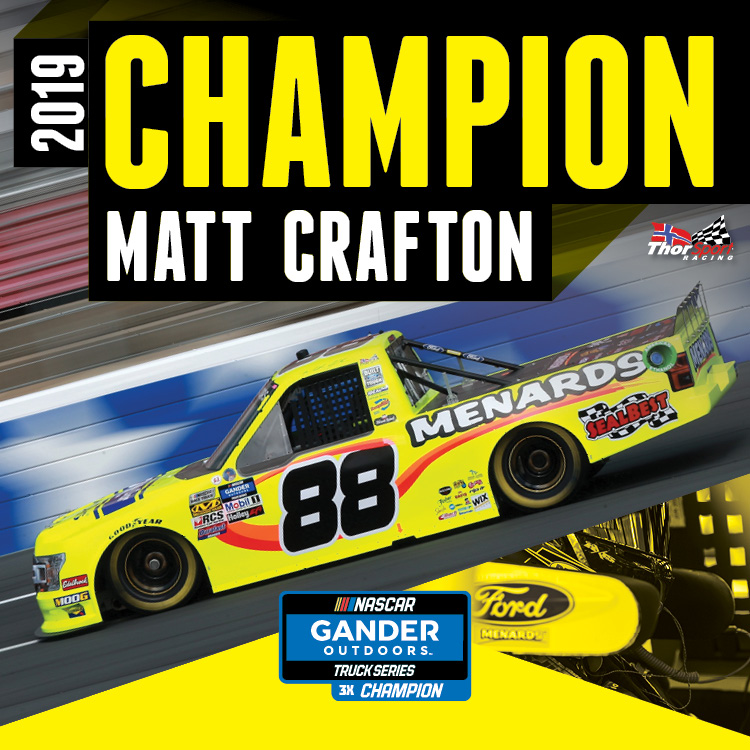 “It’s an unbelievable feeling to have three, and just the whole group behind me, Duke and Rhonda Thorson, Menard’s and every one of these guys that build these trucks every week, Junior and I are just the lucky ones. I know he makes all the calls, but at the end of the day these guys build these trucks and we’re fortunate enough to be able to — he makes the calls and I get to drive these things. This thing was phenomenal. Hill had a rocket ship and there at the end of the race I felt like I could have raced him harder, but at the same time I felt like I could have lost a lot of time racing him and at the end of the day it was about winning the war and not the battle.” – Matt Crafton

“I just can’t say enough about these guys and everybody at ThorSport. Just the perseverance that everybody in this organization had, these guys tonight, we get kicked, we’ve had off nights, we’ve had tough weekends, and to end the season with the championship and win the regular season championship, this organization has the big hardware. I know we didn’t win as many races as we want to. We’re going to come back next year and really focus on that. But I’d just like to give a lot of thanks to Duke and Rhonda Thorson for having faith in us and giving us the opportunity to do this and the perseverance that everybody had to win this deal. It’s truly special.” -David Pepper, Team Manager