SANDUSKY, Ohio (Sept. 22, 2021) – All American Quarter Horse Congress has partnered with ThorSport Racing to come onboard Johnny Sauter’s No. 13 Toyota Tundra at Las Vegas Motor Speedway on Sept. 24, and at Talladega Superspeedway on Oct. 2. 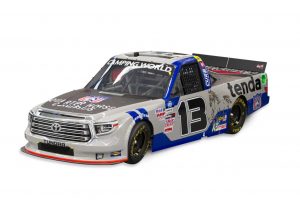 “The All American Quarter Horse Congress is excited to be joining ThorSport Racing and supporting Johnny Sauter’s No. 13 Toyota Tundra this weekend at Las Vegas Motor Speedway and at Talladega Superspeedway. Our partnership is born from the mutual support we provide each other as Ohio based organizations, sharing many of the same goals and values. The All American Quarter Horse Congress has supported talented competition for over 50 years and we look forward to supporting ThorSport Racing and seeing Johnny in Victory Lane,” said Dr. Scott Myers, CEO of the Ohio Quarter Horse Association.

Sauter enters the Las Vegas race weekend looking for his second Camping World Truck Series victory at the track. He drove to Victory Lane in 2009 and has led a series career 128 laps at the track.

Tune in to all the action from Las Vegas Motor Speedway this Friday, Sept. 24 at 9 p.m. ET on FOX Sports 1. Additional coverage can be found via the Motor Racing Network (MRN) and SiriusXM Channel 90.